Here we are with another StarWars The Force Awakens review! This set is Rey's Speeder, a brand new speeder type we first saw on the trailer some months ago.
Again, I'm not sure how the vehicle or the characters fit in the plot, and I'm trying to avoid any spoiler, so no information on that side :)
On the Lego side, I was instantly attracted by this set, the dark red color and the greebling being the main factor for my interest. So let's see how it is! The set comes with two numbered bags, an instruction booklet and a small sticker sheet. Except for the protagonist headgear, there are no new molds, but there are some existing parts in new color, expecially in Dark Red. Here's a selection:

The set comes with two minifig, Rey and an Unkar's Thug. Rey has two option for the head: a brown ponytail or an awesome new part: a pair of goggles with "turban" like protection. Her body is printed with some rags, covering both the torso and the leg, the result is good and faithful to the movie (as far as we can tell!).
The Unkar's Thug wears a gray jacket with sand green patches, and has curious white dots. I don't know what they should represent.. Maybe holes in a shirt? Or a chain mail?

Here's the protagonist with her headpiece on: The "desert people" look is cool, despite the headpiece being a little too big in my opinion. The backs are both printed and Rey has an alternative, more "decise" expression. The build starts from the bottom, with a profiled lower side, and with some technic stuff. I was pleasantly surprised to see that this smallish model has a play feature. An empty room is created in the middle of the body, with a tiled floor, indicating some storage van. A lot of attach point are placed toward the front to accomodate the frontal curved grille. On the back, the axle that activate the playfeature is used to support the engine, cleverly disguising it. I really like the style of this "pipe". The upper of the two engines is built next, which actually only have the "exaust": the tube is "integrated" into the seating and side panels. The result looks great. The curved top is now added, together with user control sticks and an hint of a windshield. The frontal grille submodel is built and attached to the front, and then flanked by the curved sides. I like the resulting shape! Finally, the side panels are added. The tapered plates contribute to the curvy style of the speeder, while the traces of orange add to the "rusty" feel. Some tools are attached to the side, creating a pleasant greebling effect. They're only on one side while the other is flatter. Notice i didn't apply the stickers on the "guards" on the right side: i love those pieces and use them a lot in my MOCs, didn't want to ruin them :)

A stud shooter is attached to each side, and the build is completed! Compare the shape to the real thing, i think the designer did a wonderful job to replicate the bike: The proportions are maybe a little off with respect of the driver (the Lego version being a little bigger), but that's acceptable.

Here's another angle. I think the side shooter on the bottom protudes a little too much, to the detriment of the overall shape, but that's also totally tolerable. The opening mechanism works, it opens the doors up to this angle: You can then pull them completely open manually, which allows to remove the small bin that's loaded inside.

I liked this model a lot. Maybe it will not be one of the most memorable, but it's excellently designed and very original. Rey is likely to be a key character in the movie, so collectors will be "forced" to buy this set, but i think non-hardcore starwars fan will be satisfied too.

Rey's Speeder is now available for purchase from LEGO.com for $19.99, £19.99, or check other store prices and sales history here. 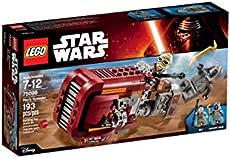 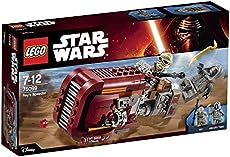 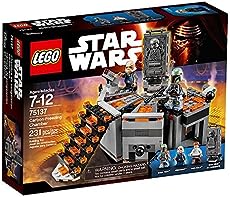 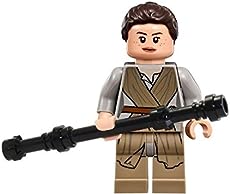 LEGO Star Wars Minifigure - Rey with Hairpiece and Black Staff (7…
$9.39
Bestseller
(10)
DEAL OF THE DAY
ENDS IN
Ads by Amazon