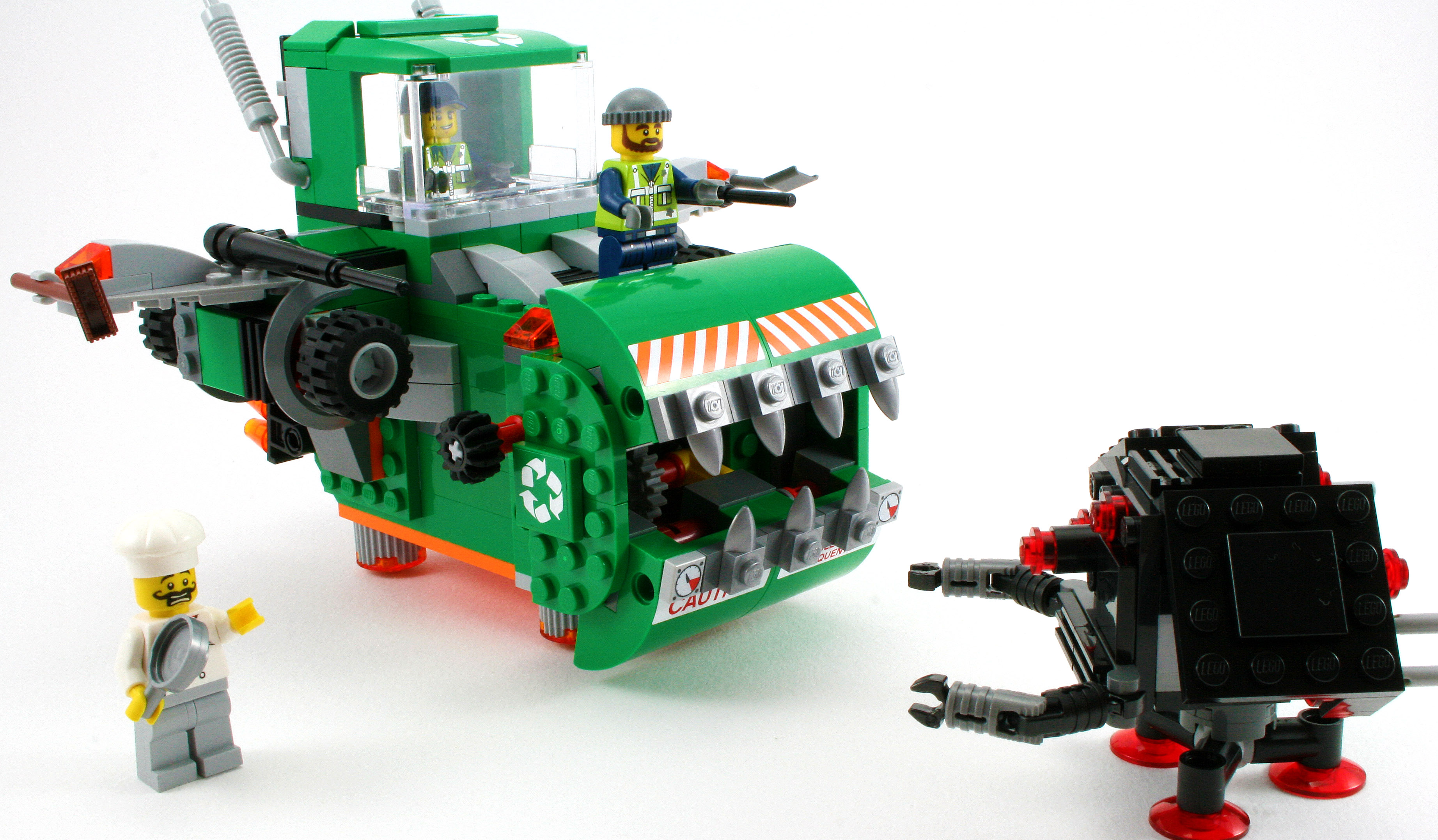 Inside the box we have:

See the full inventory. Again, book #2 builds the flying garbage machine and the un-numbered book builds the main Garbage Truck. It seems a confusing way to label them and indicates build order which goes against intuition.

The three minifigs in this set are: Garbage Man Grant, Garbage Man Dan and Gordon Zola. The two "Sanitation Workers" are using the same printed torsos/legs. Unlike most of these Movie sets, the innocent bystander (Gordon Zola) only has one face - so he is permanently freaking out about something.

Book #1 creates the three minifigs and the Micro Manager robot. The un-numbered book creates the normal Garbage Truck, and then book #2 creates the flying Trash Chomper. This Micro Manager robot doesn't have the walker legs like the others, instead it flies on its three jet things. It has four flick-powered missiles that can be deployed once its wings are unfolded. It's a pretty cool robot that is fun to play with.

The main Garbage Truck model is basically a big green box on wheels. The 6x10 orange plate (which has only appeared in two other sets) really stands out when you first start building but then is quickly hidden by other parts. To me the wheels look a bit too small for such a large truck.

Obviously the main attraction in this model is the rear compactor. A gear on the side manually raises and lowers the rear door giving access to the compactor. I felt that it didn't raise high enough though. Perhaps it's modeled after some existing garbage truck, but it would have been nicer if it raised much higher... it was quite hard shoving even a single minifig in there. The Trash Chomper is based on a similar big green box, but also has a cabin on the top and the doors are rearranged to form large jaws. The gear is used to manually open and close the mouth. The alternating teeth pattern ensures it can close tight, and it was nice to see that it can open quite wide... all three minifigs fit snugly :)

While building this set, I found the black cylinders/guns would continuously fall off as they are only hanging on by a single 1x1 plate. Otherwise, it was a nice build. The placement of the wheels under the wings is pretty cool and there is plenty of SNOT building techniques used. I found all three models in this set to be fun to build and play with. I think the Trash Chomper is more fun than the normal Garbage Truck. It's an interesting looking model and even though it can only do one thing, that thing is pretty neat :)

The following video can be found on the LEGO product page for this set:

Check out the rest of the photos taken during this review at my Bricksafe page.

This set is now available for sale via Amazon, eBay, LEGO Shop, or check the country specific links on the set's details page. Note that Rebrickable earns a small commission on any purchases made via these links, and we appreciate it when you do :)