Buying, and Karma, and Searching! Oh, my!

MOCPlans has merged with Rebrickable﻿

I have enhanced the way set management works on Rebrickable. Previously you had a single Set List with all of your sets. Now you can have multiple Set Lists to further split up your sets.

What is a Set List? It is simply a collection of sets (and can include MOCs) that you want to logically group together. You will have a default Set List created for you if you have never added any sets before, with the name "My First Set List".

Each Set List can be separately configured to be included in the Build calculations. This enables things like:

So now you can add all the sets in your collection even if you don’t intend on reusing their parts. This feature is also a stepping stone towards some other features I am planning – such as creating an exclusion list of parts from a MOC you have built and want to keep together for a while.

When you import your sets from e.g. Brickset, any new sets will be added to the Set List you currently have selected. However, if you already have some of those sets in any of your Set Lists it will not be counted twice. This allows you to repeatedly import your sets without worrying about creating duplicates.

If you import your sets via the API function /api/set_user_sets, for example from the Brickset page, it will do the same checks but any new sets are always added to your first Set List.

Similarly, when you export your sets it will only export the sets in your currently selected Set List. If you are using the API function /api/get_user_sets it will combine all sets from all Set Lists in a single export.

You can remove sets by hovering over them and clicking the X to delete that set (all copies of them if there are more than one in that Set List). Sorry iPad users – this doesn’t work on touch screen devices.

To move a set from one set list to another, you can simply drag it onto a new Set List. Once you start to drag the set, a popup will appear with your Set Lists so you can drop it on one of them. This avoids any scrolling which doesn’t work too well with drag’n'drop in browsers. 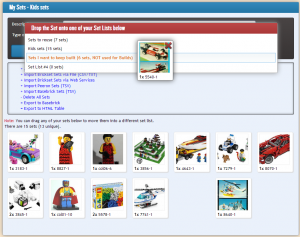